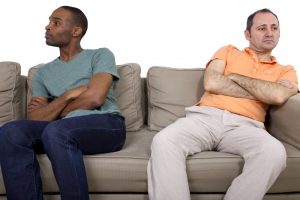 Same-sex divorce simply refers to same-sex couples filing for divorce and having to deal with the same issues as heterosexual couples must face when divorcing. However, same-sex or gay marriage has only been legal in Massachusetts since 2004, being the first state in the union to legalize it. Not all states allowed same-sex marriages or recognized such marriages performed in other states until recently.

If you are a same-sex couple, you undoubtedly celebrated the landmark Supreme Court cases of United States v. Windsor, decided in 2013, that ruled the Defense of Marriage Act (DOMA) unconstitutional as it applied to federal benefits and tax treatment, and Obergefell v. Hodges (2015) that finally decided that marriage is a fundamental right that extends to same-sex couples.

However, with marriage comes the same consequences and unfortunate circumstances that plague heterosexual couples such as separation, child custody, alimony and divorce. Although same-sex couple marriages are now legal in all 50 states and D.C., you may encounter some differences in how you are treated. Further, you may not be treated the same in other countries where same-sex marriage is not recognized.

Although same-sex married couples who are divorcing are subject to the same laws and factors affecting issues of property division, custody, child support and maintenance, there may some issues regarding how these apply in their particular situation.

If you are a same-sex couple and have questions regarding divorce and the issues involved, call the Law Offices of Jason C. Matalas at (978) 304-2888.

Factors affecting property division and alimony, or spousal maintenance, include how long the parties were married and what constitutes marital property versus separate property. Although Massachusetts recognized same-sex marriage in 2004, a couple may have been together long before then. Determining what is marital and what is separate property may be also be in dispute if the parties cohabitated before marriage.

Spousal maintenance is awarded in cases where one party has more economic resources or income than the other who needs financial support for a certain time. Its main purpose is to help a party maintain the same standard of living that existed during the marriage, or to help that spouse with training or education to increase his or her earning capacity. Factors that a court will examine in determining whether and how much spousal maintenance to award include:

The period of time for how long maintenance is to be paid depends on the duration of the marriage. For instance, Massachusetts law dictates that it should be:

Alimony ends upon remarriage of the recipient party or when the payor reaches full retirement age.

Same-sex couples may have been in a civil union in another state or cohabitated for many years before marrying in 2004 in Massachusetts when the state legalized such marriages. Or, they may have married in another state that recognized gay marriage before 2015 when Obergefell was decided or have tied the knot after Obergefell. A court will have to decide whether its determination on alimony will be based on the actual marriage of the parties or when they began cohabitating or were of a civil union relationship.

It would certainly appear to be inequitable if a court should dismiss the prior relationship of the parties in this determination especially if they were a couple in all respects but name.

Regarding property division, Massachusetts is an equitable distribution state, meaning that marital property is distributed based on the equities of the relationship.

Separate property constitutes assets brought into the marriage by each party while marital is that which was purchased or brought in during the marriage. Separate property can also be property that was gifted to or inherited by one of the married parties. Property need not be divided on a 50-50 basis when the parties divorce if there are material differences in the economic condition of the parties, which may include many of the same factors a court uses in determining the amount of alimony to be awarded.

Again, the court may decide to examine the nature of the relationship the same-sex couple had had before marriage equality here in Massachusetts or that they had if they cohabitated in a state that did not recognize same-sex marriage until 2015.

Another dilemma for same-sex couples may be child custody. For example, a same-sex couple may have married in Massachusetts in or after 2004 but moved to a state that did not recognize the marriage until 2015. Though one of the parties has a biological child, both may have substantially contributed to the child’s upbringing.. However the non-biological “parent” likely did not have any parental rights in that state or may have been denied the right to adopt a child. A Massachusetts court will have to consider these issues in determining whether that party has custody or visitation rights if the couple separates or divorces.

Further, if one of the parties wishes to have the divorce in Massachusetts, he or she will have to establish residency here for at least one year and show that “grounds” for the divorce developed in that other state. Massachusetts is a “no-fault” divorce state so the only basis that needs to be alleged is that their differences are irreconcilable.

The best advice is to totally avoid a court battle. Despite the enormous legal fees and emotional costs to you, you can also inflict lasting damage on the child. In any event, evidence of a strong and enduring relationship is vital since the standard in any child custody dispute is what is in the best interests of the child. If you can also show that the only reason you could not be a legal parent or have adopted the child is because you could not legally marry or were denied the opportunity to adopt, then you have demonstrated some degree of moral and legal injustice if you, as the non-biological and non-adoptive “parent” is denied at least visitation.

Jason Matalas is an experienced attorney in Peabody who handles divorce matters including those for the LGBT community. If you have questions regarding separation or divorce and how the laws of Massachusetts affect your rights regarding spousal maintenance, property division or child custody, contact his office at (978) 304-2888.

Attorney Matalas has been practicing law in Massachusetts since 2013. A graduate of Suffolk Law, Jason has a varied legal background which includes estate planning, consumer protection litigation, and employment law.
Contact now